Paving the Way for Skin-Compatible Sensors for Health Monitoring 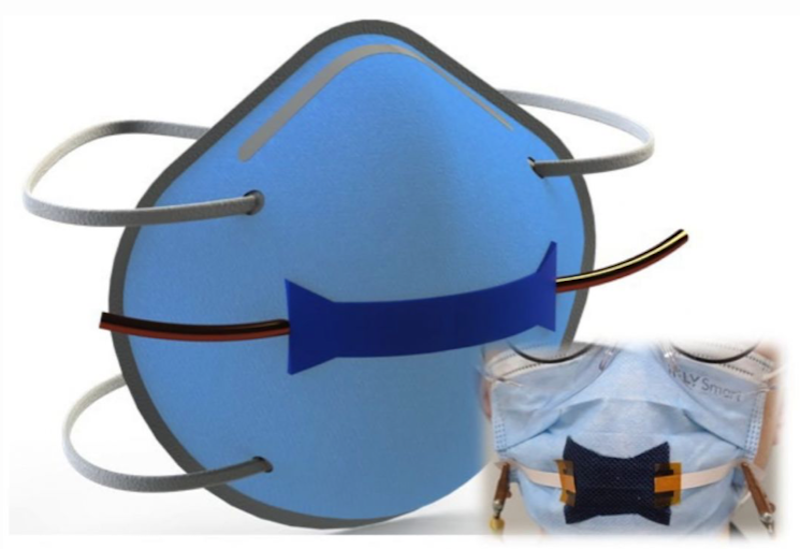 Wearable electronic devices, particularly sensors designed to recover bioinformation - body temperature, blood pressure, respiratory patterns, etc. - have become an increasingly important research subject. No matter the intended use of a portable health monitoring system, one key challenge is the delivery of the wearable sensor itself; a hard, inflexible, uncomfortable sensor is less effective simply because the user may not be willing or able wear it for extended periods of time.
Fabrics have shown promise in terms of stability, weight, skin compatibility and breathability, but create their own set of challenges when used with wearable sensors. Fabric's rough surface, high porosity and surface hydrophobicity can be problematic when using solution-processed conductive polymers - one of the most commonly used materials for wearable sensors - because the thin-film formation of the materials relies on a liquid-phase depositing technique. Solution-processed conductive polymers also require harsh conditions, such as acid treatment or temperatures in excess of 150° Celsius, that are not ideal for common fabrics.
Sunghwan Lee, assistant professor in Purdue Polytechnic's School of Engineering Technology, along with Michael Clevenger, engineering technology graduate student, Hyeonghun Kim, postdoctoral research assistant, and Han Wook Song and Kwangsoo No, researchers at the Korea Research Institute of Standard and Science, identified a better way to directly fabricate sensors onto ready-made wearable items, such as clothing, gloves, or even disposable masks, to create an effective sensor that can be worn by the patient with increased convenience and comfort. For their research, Lee and the rest of the research team decided to focus on oxidative chemical vapor deposition (oCVD), which has recently emerged as an innovative and unique method for synthesizing conductive polymer films with superior conductivity. They used the oCVD technique to create a conformal poly (3,4-ethylenedioxythiophene) layer, referred to as a PEDOT layer, on nylon, polyester and cotton fabrics, and on disposable wearables including commercially available gloves and masks. For further information see the IDTechEx report on Wearable Sensors 2021-2031.
Lee and his team conducted a range of tests to determine the feasibility of oCVD PEDOT film in the creation of wearable sensors. These tests included:
After these and other tests were complete, Lee and the rest of the research team fabricated two protype sensors - one each on a commercially available glove and mask.
According to Lee, this is the first report of vapor-printing sensors directly fabricated on ready-made masks.
Lee's research proves that sensors created from oCVD PEDOT and printed directly onto commercially available fabrics can successfully extract bioinformation in real time, with remarkable precision. Their October 2021 article, "Binder-free printed PEDOT wearable sensors on everyday fabrics using oxidative chemical vapor deposition," is the first report to prove the usability of the oCVD method on fabric-based sensors. In the article, Lee states that their research represents a groundbreaking advancement in the development of versatile healthcare devices printed directly onto ready-made clothing that can be worn comfortably by the patient, which ultimately will make these devices more effective.
Source and top image: Purdue University