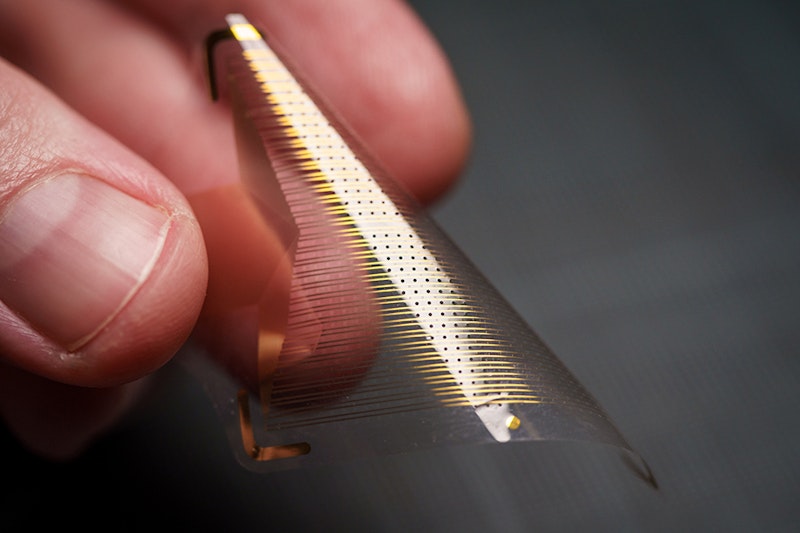 High-resolution recordings of electrical signals from the surface of the brain could improve neurosurgeons' ability to remove brain tumors and treat epilepsy, and could open up new possibilities for medium- and longer- term brain-computer interfaces.
A team of engineers, neurosurgeons and medical researchers has published data from both humans and rats demonstrating that a new array of brain sensors can record electrical signals directly from the surface of the human brain in record-breaking detail. The new brain sensors feature densely packed grids of either 1,024 or 2,048 embedded electrocorticography (ECoG) sensors. The paper was published by the journal Science Translational Medicine.
These thin, pliable grids of ECoG sensors, if approved for clinical use, would offer neurosurgeons brain-signal information directly from the surface of the brain's cortex in 100 times higher resolution than what is available today. Access to this highly detailed perspective on which specific areas of the tissue at the brain's surface, or cerebral cortex, are active, and when, could provide better guidance for planning surgeries to remove brain tumors and surgically treat drug-resistant epilepsy. Longer term, the team is working on wireless versions of these high resolution ECoG grids that could be used for up to 30 days of brain monitoring for people with intractable epilepsy. The technology also holds potential for permanent implantation to improve the quality of life of people who live with paralysis or other neurodegenerative diseases that can be treated with electrical stimulation such as in Parkinson's disease, essential tremor, and the neurological movement disorder called dystonia. For further information see the IDTechEx report on Flexible Electronics in Healthcare 2020-2030.
The project is led by electrical engineering professor Shadi Dayeh at the University of California San Diego Jacobs School of Engineering. The team of engineers, neurosurgeons and medical researchers hails from UC San Diego; Massachusetts General Hospital; and Oregon Health & Science University.

Recording brain activity from grids of sensors placed directly on the surface of the brain—electrocorticography (ECoG) - is already in common use as a tool by neurosurgeons performing procedures to remove brain tumors and treat epilepsy in people who do not respond to drugs or other treatments. The new work in Science Translational Medicine provides a wide range of peer-reviewed data demonstrating that grids with 1,024 or 2,048 sensors can be used to reliably record and process electrical signals directly from the surface of the brain in both humans and rats. For comparison, the ECoG grids most commonly used in surgeries today typically have between 16 and 64 sensors, although research grade grids with 256 sensors can be custom made.
Being able to record brain signals at such high resolution could improve neurosurgeons' ability to remove as much of a brain tumor as possible while minimizing damage to healthy brain tissue. In the case of epilepsy, higher resolution brain-signal recording capacity could improve a neurosurgeon's ability to precisely identify the regions of the brain where the epileptic seizures are originating, so that these regions can be removed without touching nearby brain regions not involved in seizure initiation. In this way, these high resolution grids may enhance preservation of normal, functioning brain tissue.
Demonstrating that ECoG grids with sensors in the thousands function well also opens new opportunities in neuroscience for uncovering a deeper understanding of how the human brain functions. Basic science advances, in turn, could lead to improved treatments grounded in enhanced understanding of brain function.
Recording brain signals at higher resolution is attributable to the team's ability to place individual sensors significantly closer to each other without creating problematic interference between nearby sensors. For example, the team's three-centimeter-by-three-centimeter grid with 1,024-sensors recorded signals directly from the brain tissue of 19 people who agreed to participate in this project during the "downtime" of their already scheduled brain surgeries related to either cancer or epilepsy. In this grid configuration, the sensors are one millimeter apart from each other. In contrast, the ECoG grids already approved for clinical use typically have sensors that are placed one centimeter apart. This provides the new grids 100 sensors per unit area compared to 1 sensor per unit area for clinically used grids, offering 100 times better spatial resolution in interpreting brain signals.

Sensors Made With Platinum Nano-Rods

While using platinum-based sensors for recording electrical activity from neurons in the brain is not new, the research team is using platinum in a novel way: nanoscale platinum rods. The nano-rod shape offers more sensing surface area than flat platinum sensors, which helps to make the sensors more sensitive. The sensing system is based on the fact that the electron count in the platinum nano-rods changes in response to neurons firing in the brain.
Charged ions move in and out of a neuron when it fires. This movement of charged ions causes changes in the voltage potential in the cerebrospinal fluid that the neurons are bathed in. These changes in voltage potential in the brain tissue and cerebrospinal fluid change the population count of electrons in the platinum nano-rods by charge screening processes. In this way, the firing of neurons at or near the surface of the cerebral cortex is recorded by the platinum nanorods in near real time and with high precision.

Thin and Pliable Grids of Sensors in Various Sizes

The human brain is always moving. With each heartbeat, for example, the brain moves with the pulsating blood flowing through it. The platinum nano-rod based sensor grids are thinner and more flexible than today's clinically approved ECoG grids. The thinness and flexibility allows the sensor grids to move with the brain, enabling a closer connection and better readings. In addition, the grids are manufactured with small, ring-shaped holes that allow cerebral spinal fluid to pass through. In this way, these perfusion holes support a better interface between the sensor grid and the brain surface by allowing the sensor to easily and safely displace the fluid.
The new platinum nano-rod brain sensor grids are ten micrometers thick, approximately one tenth the size of a human hair and 100 times thinner than the one millimeter thick and clinically approved ECoG grids. The nano-rods are embedded in a transparent, soft and flexible biocompatible material called parylene which is in direct contact with the surface of the brain. The electrical signals travel from the brain, through the cerebrospinal fluid, and reach the exposed surfaces of the platinum nano-rods which are recessed within the parylene. This design yields a sensor grid that forms a close and stable connection with the surface of the brain, improving signal quality.
The manufacturing process used also allows for a wide variety of sizes and shapes, which opens up new possibilities for greater and more customized cortical coverage. Collecting signals from larger areas of the brain at the same time could unlock more of the brain's mysteries.
Through close collaboration between engineers led by electrical engineering professor Dayeh at UC San Diego and clinicians led by neurosurgeon Ahmed Raslan at Oregon Health & Science University, the team has implemented design improvements geared specifically for clinical use. For example, customized sensor grids can be printed with specialized holes that allow neurosurgeons to insert probes at exactly the right spot and apply electrical stimulation directly to brain tissue at specific locations. With the goal of getting higher-resolution ECoG grids approved for clinical use, Dayeh, Raslan and co-first author Youngbin Tchoe have co-founded a startup called Precision Neurotek Inc.

One of the challenges of removing brain tumors is that the presence of the tumor triggers changes in the brain, including changing what areas of the brain are involved in what functions. These changes make it critical for the surgical team to make a personalized map of the patient's brain—"functional maps"—in order to decide where to cut and where not to cut while removing as much of the tumor as possible.
The authors of the Science Translational Medicine paper demonstrated that these functional maps can be made extremely precise using their platinum nano-rod ECoG sensors. In particular, the team developed functional maps in four different people of a boundary in the brain called the central sulcus. The central sulcus divides the brain's somatomotor cortex from the somatosensory cortex. In these four individuals, the researchers placed the platinum nano-rod grids on the surfaces of the subjects' brains and asked them to do a number of activities, including hand grasping. With this information, the researchers reconstructed the actual location of this key landmark in the brain as well as the neural correlates in the brain that correspond to finger sensation and hand grasping. The results from the platinum nano-rod grids aligned with the results from the lower-resolution ECoG grids already approved for clinical use, but with more precision about exactly where this critical functional boundary is between the somatomotor cortex and the somatosensory cortex. The newly delineated curvilinear functional boundary unique to each patient's brain is superior to the often extrapolated and linear boundary that is determined from today's one-centimeter-spaced clinical grids.

Some of the team's newly published data from studies in rats also demonstrate the utility of the grids for opening new avenues in fundamental neuroscience research. The Science Translational Medicine paper, for example, includes what the researchers believe is the first mapping of a cortical column in a rat from brain-surface recordings. In the past, the mapping of cortical columns has only been done by placement of an individual needle at the surface of the brain and sequential electrical stimulation and movement of the needle across the brain surface. More generally, the fact that the platinum nano-rod grids provide high resolution data in both time and space opens up many new possibilities for uncovering new knowledge about how the brain works.
Another observation enabled by the new grids is uncovering the short and local as well as long and broad range brain waves associated with brain function all at the same time. This high- spatial and time-varying (dynamic) picture of the brain activity was documented in several supplementary movies associated with the Science Translational Medicine paper and was used to interpret hand motion in new ways utilizing brain wave patterns.

The team is working on a range of initiatives in parallel to advance these grids so that they are eligible for review for approval for short-, medium- and longer-term use. For example, the team, led by UC San Diego electrical engineering professor Shadi Dayeh, was awarded a $12.25 Million NIH Brain Research Through Advancing Innovative Neurotechnologies® (BRAIN) Initiative grant focused on developing the sensing system to the point that the next step will be a clinical trial for people with treatment-resistant epilepsy. This grant also funds efforts to make the system wireless, which would be important for creating implantable grids for medium- and longer- term use.
To accelerate the translation of these implants for broader clinical use, UC San Diego is establishing a current good manufacturing practice (cGMP) laboratory co-led by professors Dayeh and Alexander Khalessi, who is the Don and Karen Cohn Chancellor's Endowed Chair in Neurosurgery and chair of the Department of Neurological Surgery at UC San Diego Health. This cGMP will regulate the manufacture of these grids to attain FDA approvals for use in small clinical trials.
Source and top image : UC San Diego