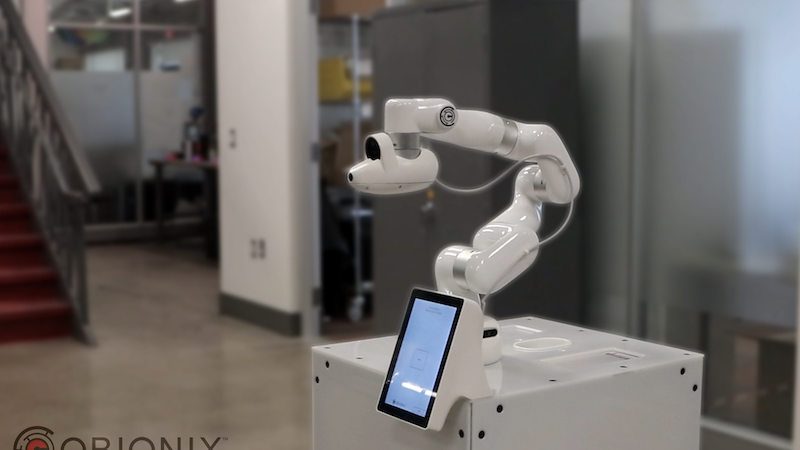 A company founded at the University of Waterloo's flagship incubator has performed the first autonomous robotic intramuscular injection, paving the way to improved patient care in an industry faced with labour shortages. Cobionix, an autonomous robotics company located in Kitchener-Waterloo, performed the injection—without needles—using their Cobi platform.
"Cobi is a versatile robotics platform that can be rapidly deployed to complete tasks with 100 per cent autonomy," said Tim Lasswell, co-founder and CEO of Cobionix. "We outfitted Cobi to use a needle-free injection technology and to demonstrate that patients could receive intramuscular injections, such as vaccines, without needles and no involvement from a healthcare professional."
Nima Zamani, co-founder and CTO of Cobionix, said there are many benefits to the new technology. "Autonomous solutions such as Cobi could protect healthcare workers, reduce healthcare costs, and improve patient outcomes," Zamani said. "The autonomous nature of Cobi also dramatically reduces the infrastructure requirements of vaccine clinics which could help reach populations in remote areas with limited access to medical care."
Lasswell and Zamani met in their first year of mechanical engineering at the University of Waterloo over a decade ago. Since then, they have both completed their engineering master's degrees and remained close colleagues. When asked about the idea to start Cobionix in 2019, Nima said it was a "common vision that we shared for the future, followed by a decision to be a part of creating that future rather than watching it unfold in front of us." The team is currently working out of Velocity, the university's incubator. For further information see the IDTechEx report on Innovations in Robotic Surgery 2020-2030: Technologies, Players & Markets.
The vision for Cobionix and the Cobi platform extends beyond vaccinations to include a variety of tasks that can be completed with 100 per cent robotic autonomy.
"Initially, we are targeting applications in healthcare, cleantech and hospitality for two reasons," Lasswell said. "Firstly, all of these industries suffer from labour shortages and low efficiency and secondly, because our founding team has a significant amount of experience in these industries."
Adrien Côté, executive director at Velocity, expressed delight at the opportunity to work with another company poised to make a significant impact.
"We were incredibly excited that Tim chose Velocity once again to invest in and support his newest venture," Côté said. "Cobionix's mission to improve efficiency and reduce labour shortages in healthcare, cleantech, and hospitality is well aligned with Velocity's focus to support founders building for positive, global impact."
Lasswell's previous venture, A-Line Orthopaedics, also incubated at Velocity, was acquired in June 2020.
"Velocity has significantly invested in building an environment in which early-stage technology companies can achieve rapid growth and success," Lasswell said. "As we continue to accelerate growth at Cobionix, we look forward to further establishing our roots in this community and building out Cobi."
Source and top image: University of Waterloo